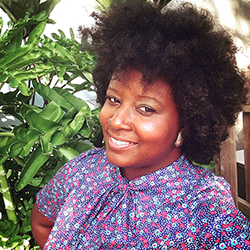 Both writer and freedom fighter, Zenique Gardner Perry uses her written work to complement her work on the ground and around the globe. She is the co-founder of Undo Bias Consulting, where she helps organizations cultivate diverse and equitable spaces.

Perry began her advocacy for diversity and inclusion at The Philadelphia Urban League and The National Family Planning and Reproductive Health Association. She has also worked with the Rockwood School District and the Center for Urban and Racial Equity in St. Louis, Missouri. As part of the leadership team at Safe Connections, Perry led the Prevention Education Program, partnering with schools and community organizations to prevent relationship and gender-based violence among teens.

Perry’s writing has appeared in two.one.five magazine, Main Course Philadelphia, The Citizine, and Inklings Journal. In 2013, Chimamanda Adichie selected her as the sole American writer to attend Adichie’s workshop in Lagos, Nigeria. Perry has led writing workshops with Simply Outrageous Youth, The Mural Arts Program, and Philadelphia FIGHT. She currently lives in St. Louis, Missouri with her husband and big dog.