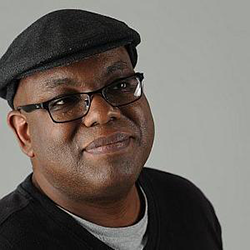 Tony Norman is a journalist at The Pittsburgh Post-Gazette. When he first began working at the Post-Gazette in the late 1980s, his work ethic and knowledge of emerging genres such as gangsta rap helped him move quickly from clerk to pop music/pop culture critic. By 1996, he was writing an award-winning general interest column, and in 1999 he joined the Post-Gazette’s editorial board. Norman's columns have won multiple awards, including first place in the National Society of Newspaper Columnists for newspapers with a circulation of 100,000 and up; first place in the Keystone, the Golden Quill, and the Pittsburgh Black Media Federation competitions; and second place in National Excellence in Feature Writing for Columns, presented by the American Association of Sunday and Feature Editors. An alumnus of Calvin College, he is a native of West Philadelphia but now lives in Swisshelm Park.