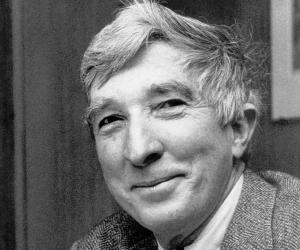 American novelist, poet, and critic John Updike was best known for his “Rabbit” series of novels: Rabbit, Run (1960), Rabbit Redux (1971), Rabbit is Rich (1981), Rabbit at Rest (1990), and the novella Rabbit Remembered (2000). Both Rabbit is Rich and Rabbit at Rest won the Pulitzer Prize for Fiction, making Updike one of only four writers to have received the award more than once. His other awards include two National Book Awards, the National Medal of Arts (1989), and the National Humanities Medal (2003). Describing his subject as “the American small town, Protestant middle class,” Updike was recognized for his careful craftsmanship, unique prose style, and prolific output. In his lifetime, he published 60 books, often exploring faith, sex, and death, and their interrelationships.

In the Beauty of the Lilies