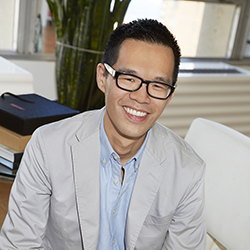 Jeff Chu is a journalist whose work has appeared in publications such as Time, Condé Nast Portfolio, and The Wall Street Journal. He is also the author of the book Does Jesus Really Love Me? A Gay Christian's Pilgrimage in Search of God in America (2013). A graduate of Princeton and the London School of Economics, he has earned awards from the Deadline Club and the German Marshall fund for his journalism. He also received fellowships from the Phillips Foundation and the French-American Foundation, and participated in the 2012 Seminar in Debates on Religion and Sexuality at Harvard Divinity School. he nephew and grandson of Baptist preachers, Chu is an elder at Old First Reformed Church in Brooklyn, New York.

Does Jesus Really Love Me?