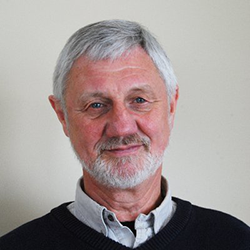 A Canadian poet, novelist, and short story writer, Hugh Cook is professor emeritus of English at Redeemer University, where he taught literature and creative writing for more than two decades. He holds an MA from Simon Fraser University and an MFA from the Writers’ Workshop at the University of Iowa. Cook’s books include Cracked Wheat and Other Stories; The Homecoming Man; Home in Alfalfa, which won first prize in both the Word Guild of Canada Awards and City of Hamilton Book Awards in 1998; and Heron River, which won first prize in the 2012 Word Guild Awards. Cook is the recipient of the Leslie K. Tarr Award, which recognizes a major career contribution to Christian writing and publishing in Canada.

Cracked Wheat and Other Stories