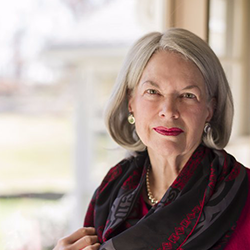 Fleming Rutledge is an Episcopal priest and writer of eight books, most recently The Crucifixion: Understanding the Death of Jesus Christ. Ordained to the diaconate in 1975, two years later, she became one of the first women to be ordained to the priesthood of the Episcopal Church.

Rutledge’s particular expertise is the intersection of biblical theology with contemporary culture, current events and politics, literature, music, and art. The Crucifixion, for which the author won a grant from the Louisville Institute, examines the contemporary meaning of Christ’s sacrifice. She has also written a book-length treatment of Tolkien’s Lord of the Rings titled The Battle for Middle-earth.

For the first 14 years of her career, she served at Grace Church in New York City. Rutledge served as interim rector of St. John’s, Salisbury, Connecticut, and has twice been a resident Fellow at the Center of Theological Inquiry in Princeton. She has been resident at Wycliffe College in the University of Toronto School of Theology, where she taught preaching, and a visiting scholar at the American Academy in Rome. Additionally, she has often been invited to preach in prominent pulpits such as the Washington National Cathedral, the Duke University Chapel, Trinity Church in Boston, and the Harvard Memorial Chapel.

The Seven Last Words from the Cross

Not Ashamed of the Gospel: Sermons from the Paul's Letter to the Romans

The Undoing of Death: Sermons for Holy Week and Easter

The Battle for Middle-earth: Tolkien’s Divine Design in The Lord of the Rings