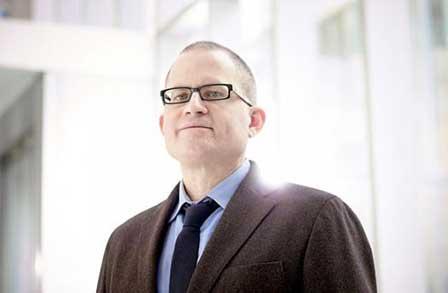 Poet, translator, editor, and essayist Christian Wiman was raised in West Texas and earned a BA at Washington and Lee University. A former Guggenheim fellow, Wiman served as the editor of Poetry magazine from 2003 to 2013. He received an honorary doctorate from North Central College.

Wiman is the author of numerous books of poetry, prose, and poetry in translation. Survival Is a Style (Farrar, Straus & Giroux, 2020) is Wiman's most recent collection; the collection Every Riven Thing (2010) won the Commonwealth Prize from the English Speaking Union, was a finalist for the Kingsley-Tufts Poetry Award, and was named one of the New Yorker’s top 11 poetry books of 2010. His collection, Once in the West (2014) was a finalist for the National Book Critics Circle award. His debut collection, The Long Home (1998), won the Nicholas Roerich Poetry Prize. Stolen Air (2012) contains Wiman’s translations of Osip Mandelstam’s poetry. With Don Share, Wiman coedited The Open Door: One Hundred Poems, One Hundred Years of Poetry Magazine (2012). Wiman’s essay collections include He Held Radical Light: The Art of Faith, the Faith of Art (2018), My Bright Abyss: Meditation of a Modern Believer (2013) and Ambition and Survival: Becoming a Poet (2007).