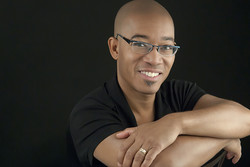 Brian Pinkney is the illustrator of many highly-praised picture books including The Faithful Friend, In the Time of the Drums, and Duke Ellington. He is a graduate of the University of the Arts in Philadelphia, Pennsylvania, and holds a master's degree in illustration from the School of Visual Arts in New York City. Pinkney has won numerous awards including two Caldecott Honors, four Coretta Scott King Honors and a Coretta Scott King Award, and the Boston Globe/Horn Book Award. His work has been exhibited at The Art Institute of Chicago, Cedar Rapids Museum of Art, The Detroit Institute of Art, The Cleveland Museum of Art, The School of Visual Arts, and The Society of Illustrators.