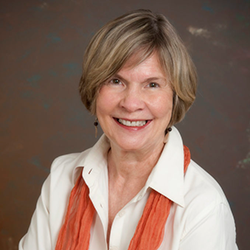 A poet and a playwright, Jeanne Murray Walker works as professor emerita at the University of Delaware and serves as a mentor in the Seattle Pacific University low-residency MFA program. Her plays have been produced by theatres in London and in cities across the United States. Her poems have been published in journals such as The American Poetry Review, Poetry, The Atlantic Monthly, The Georgia Review, Shenandoah, The Christian Century, Blackbird, and Image. She has published nine books of poetry, including Pilgrim, You Find the Path by Walking (2019), Helping the Morning (2014), and New Tracks, Night Falling (2009). Walker has also written a memoir, The Geography of Memory: A Pilgrimage through Alzheimer's (2013), in which she reflects on her experiences of caring for her mother.

Pilgrim, You Find the Path by Walking

The Geography of Memory: A Pilgrimage Through Alzheimer's