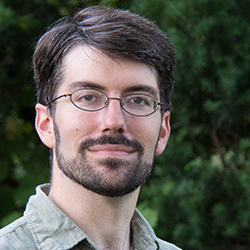 Adam Tice is a Mennonite hymn writer. The Hymn Society of the United States and Canada named him a Lovelace Scholar in 2004, and he served as a member of the Society’s executive committee from 2007 to 2010. In 2018, he began a term as the editor of the organization’s journal.

Tice began working as a church musician and choir director while still at Goshen College, a Mennonite liberal arts school. Ordained in the Mennonite Church USA, he served as an associate pastor in Hyattsville, Maryland. In addition, Tice was named as the text editor for the Mennonite Worship and Song Committee in 2016.

Tice’s work appears in many recent hymnals and supplements. His hymns have also been performed in numerous choral settings and translated into multiple languages, including Spanish, Japanese, Dutch, and Swedish.

Alongside his church-related work, Tice is music director of the male-voice choral ensemble, The Open Fifths.

An Echo of the Voice of God | review | Reformed Worship