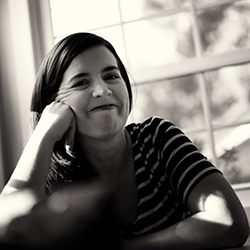 The author of two books—Blessed: A History of the American Prosperity Gospel and Everything Happens for a Reason: And Other Lies I’ve Loved—Kate Bowler has published widely in both scholarly journals and popular media. An assistant professor of the history of Christianity in North America at Duke Divinity School, Bowler has studied the rise of Christian belief in divine promises of health, wealth, and happiness by traveling throughout Canada and the United States interviewing megachurch leaders and everyday believers about how they make spiritual meaning of the good or bad in their lives. This work has been featured in the New York Times, The New Republic, the Guardian, Time, The Atlantic, the Economist, the Washington Post, NPR, and the BBC.

Bowler’s writing about health, wealth, and happiness have become personal since her diagnosis with stage IV cancer in 2015. The blog she began while undergoing an experimental treatment led to a much-shared Sunday feature in the New York Times and then to the recent memoir, Everything Happens for a Reason: And Other Lies I’ve Loved, in which Bowler explores her struggle to understand the American belief that all tragedies are tests of character.

Blessed: A History of the American Prosperity Gospel
Everything Happens for a Reason: And Other Lies I’ve Loved