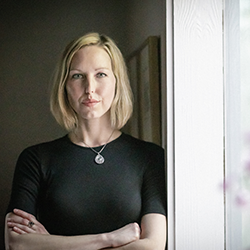 April Ayers Lawson is the author of Virgin and Other Stories, which was named a best book of the year by Vice, Bomb, Southern Living, and Refinery29, and has been published in Germany, Italy, Norway, and Spain. The title story in the collection won the Plimpton Prize for Fiction in 2011 and was also named a favorite short story by Flavorwire and anthologized in The Unprofessionals: New American Writing from the Paris Review.

Lawson’s fiction has also appeared in Granta, Oxford American, Vice, ZYZZYVA, Crazyhorse, and Five Chapters. She was a 2015 writing fellow at Yaddo, has lectured in the creative writing department at Emory University, and was the 2016–2017 Kenan Visiting Writer at the University of North Carolina Chapel Hill.

Virgin and Other Stories